Taking inspiration (again) from Chris Corrigan and his recent call for a return to blogging, like others, I am going back to my blog and taking ownership of my words and thoughts. Twenty Four years ago I first met Dave Snowden who shifted my personal story from that of process modelling and systems analysis to a much more anthropological approach using narrative, sensemaking and a gradual understanding of complex adaptive systems.

So this seems like an opportune moment to review and reflect and I hope to share, with anyone who is interested, a shallow dip into the insights, inspirations and case studies that have shifted me most.

This first one is an attempt to explain why I call myself a narrative ecologist.

A narrative ecologist, as I see it, looks not at individual stories or other system components but instead takes an ecological perspective enabling you to focus on the communities, flow and realisation of insights within a narrative landscape.

The sharing of (insights) knowledge via relationships across  an organisation is much more an ecology that needs to be nurtured, than a precisely defined machine that can be managed. Ecology has at times been called the ‘subversive science’, since it subverts our egocentric insistence on separateness.

In subsequent postings I hope to explain many of the concepts and methods that have most influenced my approach to facilitating workshops, coaching and teaching.

What if 18 people, representing all aspects of your ‘system’, were to come together for one day, and work through a sequence of workshop methods, such that they left with a new (more desirable system) story, stronger connections to each other (and the system), and a bag brimming with possibilities.

A typical workshop will:

Be facilitated as three steps:

It can take three forms:

It can be delivered as:

The participants will leave with:

See home page for further detail. Email now to find out all you need to know about booking narrative ecology workshops and training.

Twenty years of working with stories and my very kind friends at Oxford Creativity have given me my own Storytelling day. Wednesday 16th May at Oxford University.

Looking at four perspectives on narrative I will be sharing as many of the key insights I can fit in between 9am and 5pm.

The day will include participatory exercises, book recommendations, hints and tips and an in depth explanation of some of the top tools and techniques. Hexagons, sharpies and willow magic wands/talking sticks will all be in abundance.

Further details on the day and how to book can be found here. Mention this blog when booking for a very special deal either on this day or on a combined Triz for Dummies and Storytelling. What better way to spend three days?

Happy New Year. It is 2018, 20 years since Dave Snowden first introduced me to the wonders of narrative, 15 years since I attended my first cynefin training and 10 years since I did some of the early probe citizen engagement (Children of the world) experiments using Sensemaker.

In this video recorded at the recent Tedx event, Dave reveals how all three of the above have come together into a coherent approach to ethnography, complexity and most interestingly, change.

Watch carefully and make copious notes notes in your journal, then re-read and add your own perspectives on what it means to you.

Hot off the press, here is a twenty minute video of the University Hospital Coventry and Warwickshire NHS Trust RIPPLE Project, introduced by Colin Gelder (who specialises in Asthma, COPD and other Airway Diseases. He also runs the new Community COPD Team.) and nurse Charlotte.

I was lucky enough to be invited to facilitate the early workshops from which emerged the ideas for this project.

The RIPPLE Project is a study we have put together looking at the effects of using Asset based Community Development to address anxiety and social isolation in chronic obstructive pulmonary diseases (COPD). – Dr Colin Gelder – Consultant

RIPPLE is an acronym meaning

After the first five minutes of the video you will hear, first-hand, the personal experiences of some of the community members.

While you watch these amazing accounts of just what the project has done for them, imagine each short story as a narrative fragment, signified (indexed against an appropriate set of parameters) by the teller and plotted on a sensemaker narrative landscape so that you could see the patterns across the community/county/society and drop in on any aspect that attracts your interest. 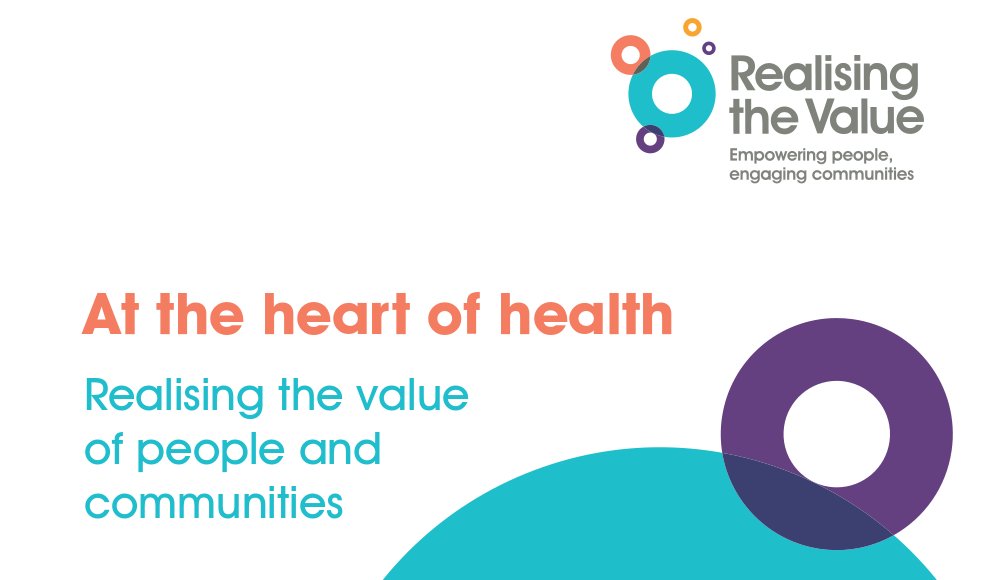 I was very excited to hear that the RIPPLE Project, which emerged from a couple of workshops I facilitated in 2014 for the University Hospitals Coventry and Warwickshire NHS Trust (in partnership with Coventry University, the British Lung Foundation and local voluntary sector groups in Coventry), is beginning to gain momentum as a prime example of a “Person- and Community-centred approach for Health and Wellbeing.

Yesterday I facilitated a similar workshop in Wolverhampton of 45 patients, matrons, GPS, Hospice workers, Chaplaincy, fire service, community trust, Age UK & voluntary sector to bring together a community (and their assets) as part of a bid to become part of a second tier of six further similar projects in the West Midlands.

Anyway we found out that on Tuesday NESTA, the independent charity that works to increase the innovation capacity of the UK, had published its latest report entitled At the Heart of Health – Realising the value of people and communities, and that the RIPPLE Project was being held as a great example of enabling group activities that can be beneficial to support health and wellbeing.

What they highlight about the RIPPLE Project is:

People with Chronic Obstructive Pulmonary Disease (COPD) experience chronic ill health and are at risk of early death. The symptoms of COPD, including breathlessness and coughing, can lead to and amplify anxiety, low self-esteem and social isolation. These in turn lower mental wellbeing and can result in both poor self-management and a lack of engagement with key treatments, such as smoking cessation and pulmonary rehabilitation. People can become trapped in a negative cycle where poor self-management leads to worsening symptoms.

As part of the Health Foundation 2014 Shine Programme, University Hospital Coventry and Warwickshire NHS Trust took a whole systems approach to this challenge. A broad partnership was set up involving local patients and carers, primary and secondary care clinicians, academics, public health professionals, and third sector organisations to discuss and develop innovative solutions to the social isolation and anxiety observed in individuals with COPD.

After consultation with people living with COPD, the partners decided that an informal community-based clinic would act as a catalyst for increased involvement. This evolved into a group model which blended informal clinic and education sessions with social activities such as bingo, quizzes, singing and seated yoga every Monday afternoon in a community centre.

Preliminary evidence – involving a small number of patients – suggests that attending the RIPPLE programme regularly may reduce the number of unplanned hospital admissions. The patients involved in RIPPLE are chronically ill and as such, you would normally expect their condition to deteriorate, leading to an increase rather than a decrease in hospital admissions. The RIPPLE team has secured additional funding through the Health Foundation’s Spreading Improvement programme which will allow these findings to be further explored.

“Coming here, well, it’s given me a social life I didn’t have before…I feel like a fraud coming here now because I feel so good.”

A couple of other quotes from the report which is probably obvious why they appeal to me are:

In essence, asset-based approaches for health and wellbeing seek to create approaches that are participatory, enabling people to lead action for health, and are underpinned by a focus on what makes us healthy.

As with many community-centred approaches, this is an area where practice on the ground is ahead of the academic research. There is a lack of systematic or review-level academic evidence about asset-based approaches for health and wellbeing.

To date, evidence of effectiveness on asset-based approaches in the UK is limited to a few local, emergent solutions within particular contexts, with little practical guidance on how to put them into practice at scale.

The entire NESTA report can be accessed and downloaded here and is highly recommended.

I have just been confirmed as speaker and seminar facilitator at the next NETIKX event in London on Tuesday afternoon 22nd March 2016. My challenge for the day is to demonstrate just what Participatory Narrative Inquiry methods can bring to resolving issues and problems and improving decision making.

If you have never heard of them before NetIKX is the Network for Information and Knowledge Exchange and with a membership fee of only £60 per annum which includes free admission to this and another five similar events over the year, you would be a fool not to join immediately. At London prices the wine alone is worth it.

My storytelling friend Dominic Kelly at a recent TEDx event in Switzerland tells us about  the greatest archetypal character of them all, the trickster. 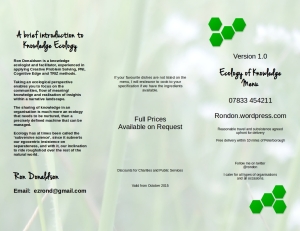 I have finally managed to create a menu of services that I am happy with. Click on either image to enlarge. The PDF version can be downloaded here, a version complete with prices is available on request..

and yes, before you ask, I do have 25 years experience of providing discos and music quizzes so why not end (or punctuate) your event with a participatory musical high.

Transition Network’s Rob Hopkins short introduction to ’21 Stories of Transition’, a new book produced to coincide with the COP21 climate negotiations in Paris.

I have just ordered my copy and you can read about and order yours here.

Told in the voices of the people making these projects happen.

It is NOT available via Amazon.

We use stories to:

Here is a recent keynote by Dave Snowden giving a thorough overview and introduction to  cynefin and sensemaker, which is packed full of thought provoking insights.

Highly recommended and lasting just over an hour my three favourite quotes are:

(In a complex system) Manage the evolutionary potential of a moment in time and adjust as you go. Manage beneficial coherence within attractors within boundaries.

There is an opportunity between free market capitalism and state planning for locally contextualised initiatives that can emerge at significantly lower cost than either of the other mechanisms.

(In a complex system) measure Vector not Velocity; success is right direction not order; otherwise an unachievable end point is always going to fail.

I had not heard this ‘Vector not Velocity’ before but it reminded me of a story from Nick Owen’s book ‘The Salmon of Knowledge’ about the wise fool:

The wise fool takes the whole context into consideration and looks at every issue from every conceivable angle. Ask him, ‘Which is better, a fast horse or a slow one?’ He will say, it depends. ‘it depends whether you and your horse are going in the right direction